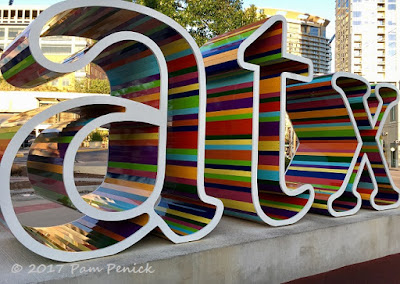 What will the Austin Garden Bloggers Fling next May 3-6, 2018, look like, and what will attendees see and do? Although registration won't open until November (update: it's now open) and details are still being worked out, we can share our working itinerary with you now! Here's the current plan:

Thursday, May 3 - Welcome Party
We encourage everyone to arrive early enough on Thursday (or even better, on Wednesday) to attend our kickoff Welcome Party, to be held at downtown's Central Library within walking distance of the official Fling hotel, from 6 to 8 pm. We'll be serving fajitas, and we'll be giving an especially warm welcome to all the new Flingers joining us. 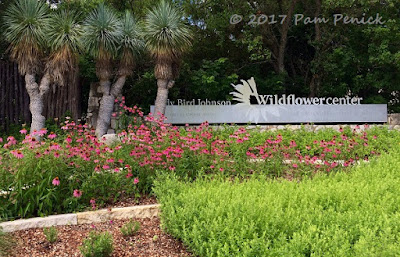 Friday, May 4 - Wildflower Center and Garden Tours in Southwest Austin
We'll start the morning at the Lady Bird Johnson Wildflower Center, a groundbreaking botanical garden and research center featuring only plants that are native to Texas. An early bus will leave around 7:30 am for those who sign up for a photography workshop led by Austin-owned Precision Camera. This will be a great opportunity to hone your garden photography skills, plus enjoy extra time in the garden. (Be sure to sign up on the registration form if you'd like to attend, as spots may be limited.) Those who want to sleep in will join us in the garden at 9 am.

We'll take our group photo here, and then you'll tour the Wildflower Center either on a docent-led tour or on your own.

Next we'll visit designer Diana Kirby's garden. Diana, lead planner of the Austin Fling and blogger at Sharing Nature's Garden, has a large garden with a tropical flair, especially around her beautiful backyard cabana and pool.

For lunch we'll head to The Natural Gardener, a destination nursery with a farmyard vibe thanks to chicken coops and display gardens featuring edibles, herbs, and fruit trees. They have a terrific succulent and cactus selection too. Other fun display gardens include a butterfly-shaped pollinator garden, a tepee and labyrinth, and a garden shaped like Willie Nelson's famous guitar, Trigger. We'll eat lunch under their big tent and will have shopping time in the nursery and gift shop.

After lunch, we'll see the last two gardens of the day: a contemporary garden filled with grasses, agave, and yucca defined by architectural steel retaining walls, and the acclaimed English-meets-Southwest garden of Jenny Stocker, also known by her blog name Rock Rose.

Dinner this evening will be on your own.

We'll have lunch in the art-filled garden of Donna and Mike Fowler in Hutto, just northeast of Austin, and then explore the fun garden that surrounds their 100-year-old home.

Dinner this evening will be a banquet dinner at the hotel. Expect fun socializing, a special celebration of the Fling's 10th anniversary, and a raffle with giveaways from our generous sponsors, plus a presentation about the 2019 Fling!

Next we'll head to Zilker Botanical Garden, where we'll enjoy an indoor lunch in their garden center. After lunch, you'll tour the gardens on your own or via docent-led tours of two special gardens: the Isamu Taniguchi Japanese Garden and the Hartman Prehistoric Garden.

We'll wrap up the fun that afternoon with a BBQ Bash with food, drinks, and -- yes! -- live music at Articulture, a fabulously creative indoor-gardening boutique with a relaxed back-yard event space. This is Austin-style socializing, and here we'll say goodbye to friends old and new!

Afterward, the buses will take everyone back to the hotel, and if you're still hungry, dinner will be on your own, or maybe you'll want to go hear some live music or enjoy a cocktail just down the street at the 1886 cattle-baron's showpiece Driskill Hotel Bar.

Update 11/12/17: Registration is now open. Click here to find out how to attend Austin Fling!
Posted by Pam/Digging https://www.penick.net/digging at 7:00 AM 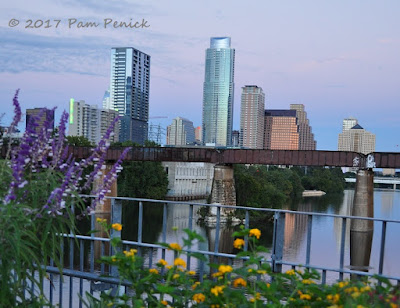 Tacos, live music, spring-fed swimming holes, a free bat show every night downtown, rugged natural beauty, and a laid-back free spirit -- what's not to love about Austin? Located in central Texas, it's where the South meets the Southwest, and where the grassy, rolling Southern Plains meets the wooded canyons of the Hill Country. You'll see magnolias and live oaks mingling with agaves and prairie grasses, and late-spring wildflowers like Mexican hat and blanket flower coloring the roadsides.

Austin's a town famous for "keeping it weird," where rednecks and hippies originally found common ground listening to Willie Nelson in local honky-tonks, and where you can still go two-stepping at the Broken Spoke or rock out with thousands at Austin City Limits Music Festival. It's the Live Music Capital of the World and home to the long-running Austin City Limits TV show. Great live music can be heard any night of the week at downtown clubs. 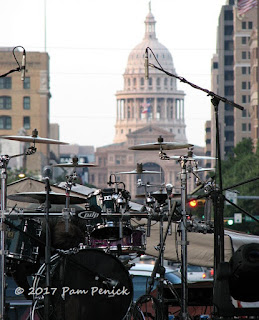 It's a high-tech city dubbed Silicon Hills and a creative hub where the South by Southwest (SXSW) Conference brings the world to Austin each spring to explore the convergence of the interactive, film, and music industries. Our skyline bristles with cranes as new high-rises sprout up seemingly every day -- to the dismay of many long-time Austinites, who reminisce about when "Austin was cool" and undiscovered.

Austinites love the outdoors and enjoy plentiful trails, parks, natural springs, rivers, and lakes. Lady Bird Lake, a dammed section of the Colorado River, runs through downtown, and the popular Hike-and-Bike Trail around it is a perfect spot to work off some tacos; look for bike-rental stands or just bring your walking shoes. You can also rent paddleboards, swan pedal boats, or kayaks and enjoy some water time (no swimming though). If you want to swim, or just see the "soul of Austin," Barton Springs Pool, a chilly spring-fed swimming pool, is a can't-miss attraction, located in Zilker Park just south of downtown. 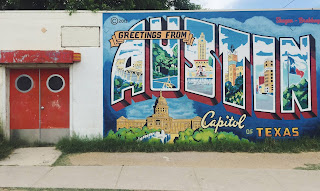 Austin is the capital of Texas, and history and architecture buffs will enjoy a tour of the Texas Capitol building and Bullock Texas History Museum. As a liberal city in the middle of a conservative state -- the blueberry in the cherry pie -- Austin's local government often locks horns with its state leadership, though its citizens are equally proud to call themselves Texans. It goes without saying, but the Austin Fling welcomes all garden bloggers regardless of race, religion, sexual or gender orientation, and you'll find that Austin welcomes you too.

Early May is a wonderful time to see Austin's gardens at their best. Many flowering plants will be at peak bloom before summer's heat arrives. Temperatures in early May are generally warm but comfortable, with average highs in the low 80sF (around 27.7C) and lows in the mid-60s (18.3C). While it'll be too late in the season for the famous Texas bluebonnets (though you might see a few hangers-on), you can expect to see plenty of late-spring wildflowers like gaillardia and ratibida and other coneflowers in colorful bloom. 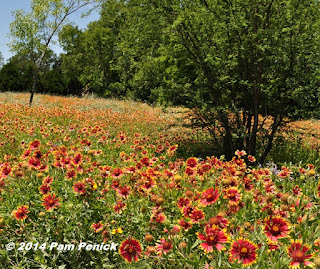 I've only touched on all that Austin has to offer as a travel destination, but I hope it sounds fun! We'll be sharing lots more about Austin and its gardens in weeks to come, including, next week, the itinerary. It's getting real, friends!

Posted by Pam/Digging https://www.penick.net/digging at 1:27 PM 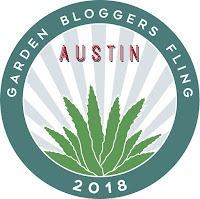 Next spring, Garden Bloggers Fling heads back to where it all began in 2008, the beautiful city of Austin, Texas! Home to absurdly large numbers of garden bloggers, taco joints, live music venues, and the largest urban bat colony in North America, Austin is rolling out the welcome mat and spiffing its best gardens for YOU.

Garden bloggers, you're invited to join us for 3 full days of garden touring plus a fun kickoff happy hour on the afternoon of May 3rd. We've got a lot of cool gardens lined up and exciting events planned, including a little live music! And tacos, of course.

We'll have approximately 90 spots available (click here for eligibility guidelines), and we expect to open registration in November. More details on all that plus the registration cost will be coming soon, so stay tuned. All announcements will be posted on this blog and our official Fling Facebook page. Over the next several weeks we'll be sharing fun details about Austin, the gardens we'll be touring, special events we're planning, meals, and more. We hope to see you next May in our hometown!

Until then, turn up the volume and enjoy our sneak-peek video of the 2018 Austin Fling. Oh, and feel free to grab the Austin Fling button (top of this post) to put in your sidebar and share with your readers!

Posted by Pam/Digging https://www.penick.net/digging at 12:51 AM